About the Sara B. Aleshire Center 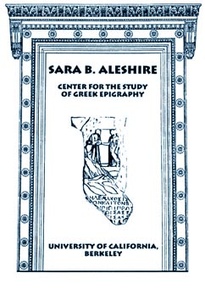 The Sara B. Aleshire Center for the Study of Greek Epigraphy was established in 1999 as a campus research facility endowed by the estate of the late Dr. Sara B. Aleshire, an alumna of the Graduate Group in Ancient History and Mediterranean Archaeology (AHMA) and a distinguished scholar of Greek epigraphy and ancient Greek religion.

The purpose of the Center is to encourage and support the research of UC Berkeley faculty and graduate students in ancient Greek inscriptions from all regions of the Mediterranean world, and to promote epigraphic studies in North America. To that end, the Center provides funds for:

The Center is part of AHMA and is administered by an Advisory Committee to its Chair, Professor Emily Mackil (History). The members of the Advisory Committee are Professor Nikolaos Papazarkadas (AGRS and AHMA) and Professor Donald Mastronarde (AGRS, emeritus). The Center is housed in a newly renovated space in 310 Dwinelle. It includes a substantial research library in Greek epigraphy and Greco-Roman history, an extensive collection of offprints especially in Greek epigraphy and religion, an archive of photographs of Greek inscriptions, and a large collection of squeezes primarily of Attic, Peloponnesian, Boeotian and Cycladic inscriptions. All of these materials can be found in our online database at http://aleshire.berkeley.edu. The Center is also one of the four hubs of Supplementum Epigraphicum Graecum, which has been published in Berkeley without interruption since 1976, when it was resurrected by Ronald S. Stroud and Harry Pleket.

Dr. Aleshire received her Ph.D. in 1986 from the Graduate Group in Ancient History and Mediterranean Archaeology. She was the author of The Athenian Asklepieion: The People, Their Dedications, and the Inventories (Amsterdam, 1989) and Asklepios at Athens: Epigraphic and Prosopographic Essays on the Athenian Healing Cults (Amsterdam 1991), and numerous articles and reviews on Greek inscriptions and ancient Greek religion. From 1976 until her untimely death she was Assistant Editor of the Supplementum Epigraphicum Graecum. Dr. Aleshire was a permanent research fellow in the Department of Classics at UC Berkeley. She was a frequent speaker at international conferences in classical studies and a devoted alumna of the American School of Classical Studies at Athens and the Graduate Group in Ancient History and Mediterranean Archaeology of the University of California at Berkeley.